The Girl Who Glees 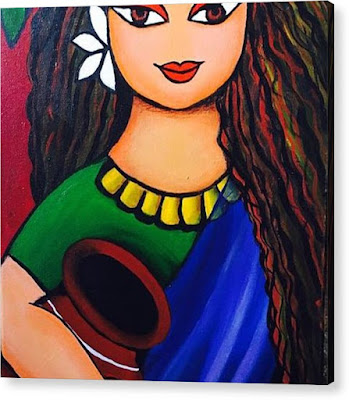 When she was walking along the side of the river Pachaiyar, the bus, she and her father got down went past them. Its going to kalakad terminus. They got down from that bus in Devanallur to visit the Pilikinathar samiyaar.

She was born and brought up in Mukkudal, which is 30 kms from Devanallur. Her mother left her and her father for another man when she was very young. She and her father lived in content with their small house, farming land and cattle. They seek solace from their sorrow by not talking about the woman who left them. But on sometimes they both burst into arguments, quarrels about why they are living a life like this, why she had not got another mother.

While growing up, she is not like other girls of her age. Not playful, no giggling and no ornaments wearing. Her father used to call her as, ‘Onaai’ that is wolf, as it hunts in the night separately and mostly looks with a cunning glee. Usually, it picks up a goat from his sheep-pen. After hunting silently, it moves into the forest nearby and howls in glee. He thought it as a bad omen.

He used to compare his small girl to that wolf, as she also had a glee when a bad thing happens in the neighbourhood. For a short span of three years, he left her in his sister’s house in Palayamkottai. He wanted her to study well. On one day, after visiting her, he started for his hometown. She asked him to take her back home. But he insisted to stay and study. She made angry remarks towards him and vehemently glee like the wolf, squinting her eyes. He felt an uneasiness within him. After a week of return, his sister complained to him as his daughter was not sleeping in night and sat up, starring at her. Within two days, a telegram announced that his sister was dead.

After that she somehow her school studies and came back to him by telling she would not like to go back to that house again. So, he let her stay with him. She did the household chores in a swift way and sat in the backyard on a stone and sang songs of sad note. Couldn’t bear those songs, he planned to send his girl to work in his friend’s printing press.

There she learnt the proof-reading work in two days. But that does not last long. After a few months of work, her employer complained about her starring. When he asked about that she told him that she unknowingly did that. Following that, in that weekend the employer suffered heart attack and died. That frightened the people in that press. They asked her father to stop her from coming to work. That time also she glee like the wolf. Her father was so depressed of not knowing what to do.

He then put her in his school friend’s house for household help. His friend’s son, who had returned from his foreign studies, desire to marry this girl. She refused that offer. But her father persuaded her to marry as this is a good omen for her. They fixed a date for the engagement. On the previous day, the boy asked her whether she had liked him. She glees and answered, “you are not for me..”. He could not understand the statement and asked the girl’s father about that. The father scolded the girl for her unresponsiveness in life’s good moments. For that also she replied a glee, like the one he saw in his sister’s house. He was afraid of what would happen next. On that night, the bridegroom died of choking while having his dinner.

The mut was filled with fragrance of ‘Thazhambu’ flowers. A small mud lamps those were lighted in the corners and near the Peedam graced the room. Being in that room, gave him a divine pleasure. He saw his girl, who stood next to him. She was in awe.

He saw the Swamiji sitting on the peedam upon a tiger’s or some other animal’s skin. The light was not enough to prove that. Both went near him. Swamiji opened is eyes and looked at him. He told his woes in a saddened tone. She stood next to him without showing any gesture.

Swamiji again closed his eyes. A disciple touched and held him by shoulders and took him along to the next room. It had some wooden chairs. He asked the father to sit. The girl also sat and waited. After a half an hour, Swamiji entered the room.

“Leave her with me.” Swamiji’s words made the father shocked. He looked confused, “What Swamiji?” asked as if he was misunderstood what he told.

“I told you to her leave her with me. I and my twenty-eight disciples are leaving in two days to Varanasi and thereafter to Badrinath. We will take her with us. Will she cook?”

He was still in a shock of leaving her daughter with these men. Stumbled and answered, “yes, swamy.. but..”

“What..” Swamiji’s tone raised in a little way.

Swamiji laughed whole heartedly and spoke, “You.. very good father..,” laughed again and said, “leave her and I will look after her as you do. Go and get her things by tomorrow.”

He blinked his moistened eyes and wiped using his towel, “it is my pleasure swamy,” saying this he turned to the girl and told, “come my girl, you are leaving with Swamiji day after tomorrow. You will have a good fortune hereafter. now we will go home and get ready for your travel.”

Swamiji made a noticeably sound that made the man to turn towards Swamiji. He told, “Leave her now itself. You go and get her possessions by tomorrow. She will be get used to us.”

The father got a little shock on hearing this.

Swamiji continued, “Stop worrying, my son. He will be alright soon.”

He half heartedly obliged to his words. He saw his girl. She smiled as usual the same glee. He got confused that whom he got to worry, whether his girl or the Swamiji. He staggered a little while walking.

Swamiji turned towards the girl and asked, “what is your name, my child?”

While ploughing his field, he was pondering over the thoughts about her girl. She went with Swamiji and his disciples two years back. They did not return yet. On leaving, Swamiji told, “forget the worries about your girl. She will make herself great when you see her next time. Come back after two years.”

His relatives scolded him on doing this to his only girl who was in a age of marrying. They told him that the Swamiji would turn her as his disciple and made her also a Sanyasi. After that he would not be able to get his daughter marry off. He was also worried a bit on hearing all these.

Its almost three years now. He asked to the disciples in the Mut. They informed that Swamiji would be there next week. He was overjoyed to see his girl. He packed some eatables the girl liked and went to the Mut.

Swamiji sat on his peedam in a relaxed mood. More disciples were seen here and there. The Mut looked busy after days of his absence. The father searched for his girl. Nowhere she was seen. He worried. Went near the Swamiji and asked about his daughter.

Swamiji saw his concern and laughed. The father asked again in agony about his daughter whether she was with him or not and what happened to her.

Swamiji calmed him and told, “She is quite well, normal like other girls of her age. No glees, stares or songs as she had previously. And you must know what she is doing now.. she is studying Law in Banaras University,” stopped and looked at the surprised father.

“Is my daughter studying.. that too law?” laughed and cried at the same time. Got the Swamiji’s feet and cried, “All her curses and bad omen are relieved by you only Swamy.. Thank you for my life time.”

Swamiji lifted him up and said, “She is going to finish it next year. After that only you can see your daughter.”

He was overwhelmed by this and asked, “ will she be back by this time next year?”

“No.. you are going to her university by this time next year and bringing back here..” saying this Swamiji laughed.

“ya. Ya. Its a big boon for me swamy. Sure I will go and bring her here victoriously.”

He immediately went out and bought sweets to everyone and also distributed to all in his village and waited there to see his small girl’s happy glee this time.

After the father had gone, one disciple who stayed at the Mut for these two years asked the Swamiji, “how swamy she turned like that? It is like a magic..”

“yes.. while we all started our journey, she was so quiet and normal. But after days in journey, she started staring each one in a separate way and glee occasionally. But we all stayed firm in not to fall prey for activities. We ignored her starring and went on with our usual routines. She had to drop that habit of staring and gleeing at one point.

She became completely normal after a year. The life which we led make the changes in her. She felt the intense of the sufferings of the people who comes to meet me. Its a hard phase of herself. Then only I made her join the Law course in the university through my contacts over there. Its a blessing from God. The father at last had God’s grace,” by raising his hands upwards as if seeking the blessings of the God, Swamiji closed his eyes to meditate. His laughter stayed in his lips as a simple smile.