The Great Indian Kitchen - A View 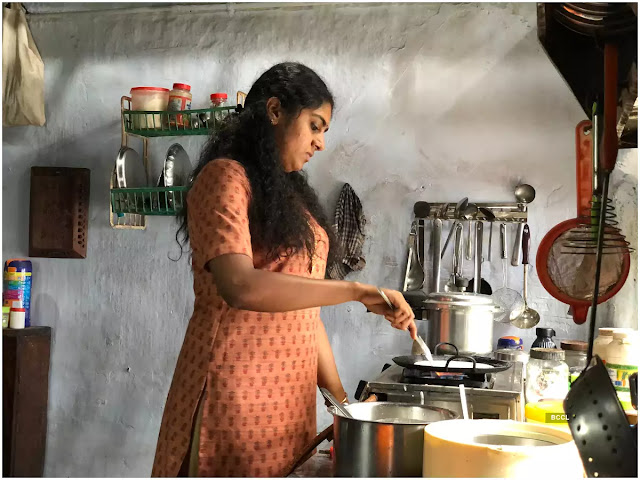 It had been so late to put a review upon this movie. But due to the pandemic, I waited for the movie to be available on an OTT platform. So that I can be able to view and pen down my view.

Movie’s storyline is mostly known to all, as this had a huge audience view. Anyhow I must do my part.

It represents the typical Indian Kitchen, most preferably South Indian kitchen. And as I am from TamilNadu, the film makers did a grateful job of taking the movie in my neighboring state language, Malayalam.

My feel about that kitchen has the same interception as far as the movie shows, like.. after seeing the film, had dinner, washed utensils keeping a keen ear for any water dropping sound coming from the sink’s outlet pipe.

Story starts with the marriage of a girl to a boy. Being a good housewife, from morn till night, she works and works in that kitchen tirelessly, with the night shift regularly carried on with her umpteen unspoken words, except the one, ‘foreplay’. Her male chauvinist / bigot type husband surprised for such words, from the film being taken on this era, and we had guessed he is the Next Gen man. He never ever peeks into the kitchen, same as his father.

Women during the menstrual periods are spent separately in a room, not to touch or see anything or anyone. Washing and drying of the blood-stained clothes or pads are not seen by the men. Its a tradition followed in remote villages and towns now also. So, when the girls come to a city for work after their studies from small towns, they enjoy their freedom from these clutches. And in this film, the girl moves from a bigger town to smaller town, not for work, but for the married life. From her liberated brought up, she faces problems against these odds. To parallel these, the director induces the Sabarimala issue, as it stood unattended in the film, except a scene where she shares a video relating to that in her fb page.

Lets finish off the story.. The girl vexed about the household work, which her foremothers, grandmothers & mother and mother-in-law carried on with small grunts here and there, left the house and her husband. When she arrives in her parents’ home, she showed her anger to her brother for not being able to fetch a tumbler of water by himself. After that she joins as a dance teacher, leads her life ‘peacefully’, not so.. we can use the word ‘happily’, that also wont set.. ‘satisfactorily’, is the right word.

The more pitiable scene shown in that film is, where her husband got married to another girl, and the same old kitchen and its works, same old dialogue continues.

Nimisha Sajayan's working mode, expressions is remarkable in the film. Adapting well into the roll, she captures every women's drudgery and toiling mood in the kitchen. 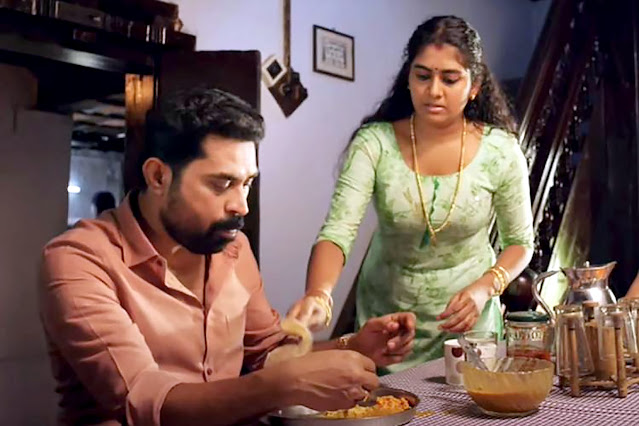 Lets go through the film..

What is the film’s ultimate move achieved?  She leaving / He remarrying / Society not bothering? Nothing. Its more than that..

They had shown their point of slides of the patriarchy system, how a man’s behavior varies between his house and the workplace, how the older women adjust against these odds, how some are somehow supportive to the other suffering women, but others are against those girls doing opposite of the traditions.

Director Joe Baby of this movie had well knit the core of the issue and set the scenes as such that we, womenfolk, could see ourselves in that mirror. The film makers are not in a haste to change the society’s face or making the woman stature bigger than the life size image and projecting as a deity beholding men’s heads under her legs. They just put some questions before us.

If you are going to marry / if you are a obedient girl to your parents / if you are brought up and pushed on into a Patriarchy social system / if you are against the odd habits about the daily, monthly dues of our body like sex, menstruation etc.. / if you are interested in taking up a working role of non traditional / unsafe / men’s’ job / if you are liberal to talk, write or post issues regarding womenfolk / ...

Like these, there are many more ‘ifs’.. If you are aware of these ‘ifs’, I wont like to frighten you with cautions.

But consider these points before getting married..

Before we talk about the marriage, husband, and in-law’s household, first study your house.

Most of our Indian households are on the same lines. Patriarchy system still prevails in most homes. If you are not able to solve the problems in your house, at least speak out problems to them. If you can’t do a single change in your parental home, then what is the point of talking it in another household.

The film takers must consider this view at first. You cannot blame a grown-up man who is about to be married. And what is the exception you can find against the girl’s household than in a boy’s household. Projecting a view that the girl is not facing the domination of the system in her own home is a bad example. Wont there be another girl, who would come to the girl’s house as her brother’s wife? Does she find it difficult to adjust the dominating menfolk (her father and brother) like she has?

The system must bring forth the problems the girls face since their childhood. About menstruation, sex, menfolk’s domination, womenfolk’s premonition that they have to manage a burden in a new house setup after marriage, need for sharing the cooking, household works by both the genders, boys and girls must be equally brought up.. so many things to open up.. Movies must talk all about that.

As these questions are not being worked out, the questions the movie left would be hanging there. 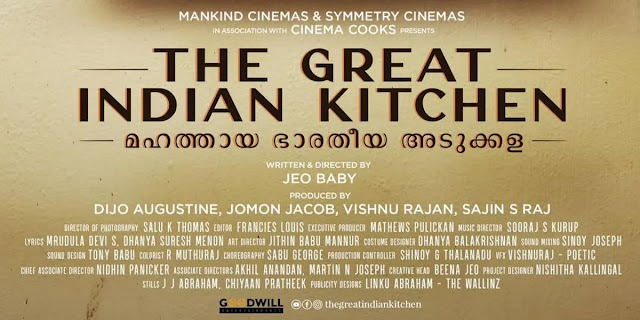