My Days in London - Day One

London is a beautiful and very different city. Like weather report, actual and feel like situations differ with much note. Metropolitan is a less value word for the city. Its much more than that.

People move around you, run over you with no extra sorrys, spill a little latte from their cups, suddenly stop at the bus stops and you feel you are in midst of a noiseless street brimmed with people.

When I arrived on LNER Azuma train from Leeds to London on a pretty rainless afternoon at King's Cross station, it gorgeously welcomed in an airport style with the boards announcing 'departures' & 'arrivals'. People stand in front of the big screen which is nearly to the top of the ceiling. They stand and stand up to their time comes.

Little stop over at Stevenage station as a lady being sick. The waitress asked for apology several times. And also asked, if we wish to go in a hurry, catch the next train in five minutes. But we stayed. A delay of forty five minutes is bearable, as we experience several hours of delay in our country without any excuses.

Already the Azuma train we had to catch at 9.45 am in Leeds got cancelled and they asked to catch the next train for London at 10.15, get down at Doncaster station and get in our scheduled London train which is about to start from that station instead of Leeds. We asked the ticket checker to make us comfortable to catch the train from Leeds itself as we are new to the London train lines. He made the arrangements and we are in the train 10.45am.

On arriving at the King's cross, as instructed by my son, we came out and followed the display 'underground'. To the right, down the stairs, go thru the boards 'circle line, Hammersmith & City line, Metropolitan line' and followed the Metropolitan line. There two trains east & west.. Got in the aldgate train, rightly arrived in seconds. Farrington, Barbican, Moorgate, Liverpool street, Aldgate at last. Got down and walked out in the rain with jacket and hood.

Next to Aldgate bus station, Motel One hotel, where we booked for three days stay stood there with colourful glass panes. Placed our luggage in the room hit the street for sight seeing. Planned to go to the nearby Tower Bridge, Tower hill.

As we stood on the hotel side road, showed Minories street, the junction shows so many hands before me to walk on. Just in confusion, a lady caught me right as Indian, no guess wanted, she being an Indian also. She just lift and showed the tower just on the right opposite of the road, the big Tower hill castle. I blushed. No regrets in defeat with my countryman.
She asked, 'Tamil?'
'Yes..'
'I know Tamil..' She said.
Exchanged byes and thanks, she hurried away.
What is the meaning of 'I know'? Isn't her mother tongue Tamil? If its, she would said, 'I am also Tamil'. No more lingering. Walked & crossed for the pedestrian's Wait signal.

The Tower hill and the Tower bridge appeared near in spite of crossing the junction in a criss cross way. Lot more enjoyment in the drizzling rain and chill wind.

The Tower bridge and the London bridge are different ones. We as an outsider, mostly think they both are same. but tower bridge
The famous rhyme goes like this, "London bridge is falling down.." So hence we remember the words as London Bridge and the picture of bridge in the postcards with the beautiful twin towers, closed high level walkways with side hanging rails, and the Victorian engine room. We are not aware of they both are different in real. The beautiful one in the picture cards of London is the Tower bridge. Just opposite to that the London bridge is the oldest one across the river Thames. And not so ornamental like the Tower bridge, simple in design with 'spike' sculpture on the south side of it. There are 30 such spikes representing the severed heads of traitors against the crown.

The Tower bridge is the one that was built in 1894 and its bascule and suspension bridge. In good olden days, the bridge staff watch out for the big ships to cross and opened the bridge, stopping the vehicles and people. But nowadays, they book the ships to be crossed in advance and post in their website Tower Bridge regularly. Visitors to London can check and see the wonderful sight. We are not that lucky as our timetable and bridge timetable went hand in hand.

Some photographs at the lovely evening time..

My most favourable photograph in London is this one. As I am standing on the backdrop of the river Thames. Its my dream of good old childhood days. My schooling was in St. Joseph Convent, Nagercoil. The nuns, sisters or mothers, whatever they call, every year or so, some of them visit London and tell us the stories about the river Thames and the cathedrals around there. So it stayed for so long time, that I was once asked to come over by my son naveen, when e started working there. And that time I was not able to go as my husband was then working as govt. official. There I left that dream. But its there in the destiny to be there now. So this one is my favourite, no doubt. I stand there for sometime watching, listening to the river's music as it got ringing as the same as in my childhood days while hearing the stories from them, murmuring 'Atlast I am here..' I would thank my son for this. 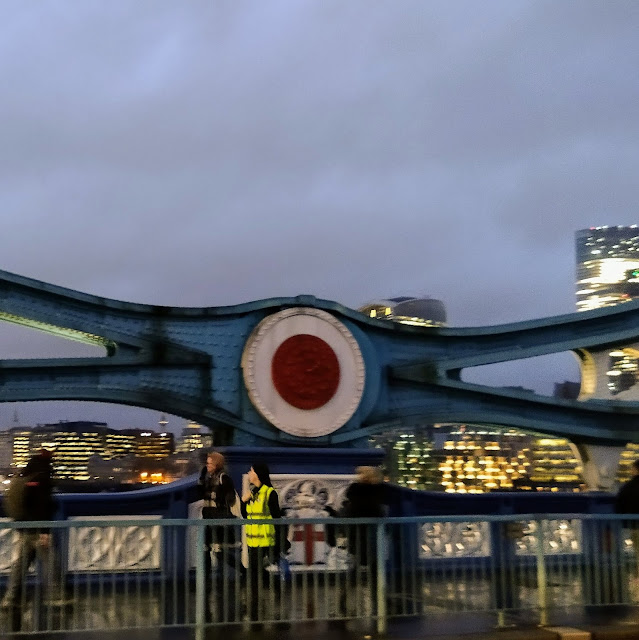 Under the bridge, the old flat stairs lead to the shopping malls, river pier and the eating spots like Vapiano. Caramelised peanuts hot from the pot are on sales on selected spots. Tempting, we had one cup for 2 pounds. Its like our 'Verkadalai' on our Indian beaches. Its salty and spicy, but this is sweet and cinnamon caramelized.  Yummy ! I hadn't took any picture of it. Here I am posting pictures taken by myself, so you can search in the internet.

Tower Bridge at night.. Spectacular sight of the bridge and the river.

Dinner at Vapiano. They make the order from what we choose to have. There are Pizzas & Pastas. I choose to eat Pizza. Went to that section and ordered my favorite Garlic Bread Pizza and a Verdure Pizza. Waiting in a table with hungry stomach and tired legs made me to click the photo.

It costs around 24 pounds for the two. Garlic being 4 pounds and 19 pounds for Verdure. No money conversion please !

And the day ends here.. On the way back, we had some buns and chocolates and cut fruits for the night. Because its only 5.30 pm then. Around 4pm itself the darkness starts as its winter's first leg. 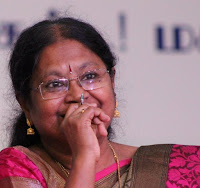