One Night @ The Call Center - A Glimpse

one night @ the call center 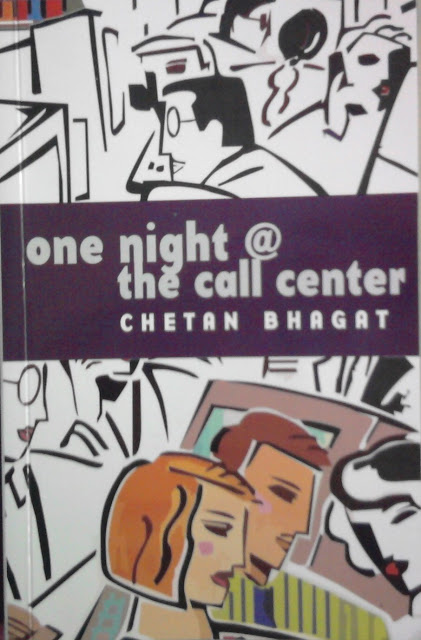 And this time out of IIT/IIM, his own cocoon or territory. He reasoned it out in the prologue of this book. Believable....In this one he took the call center job and reigns it well.

This book tells the story of six guys, working in a call center, same bay and coincidentally comes in the same pickup vehicle. The author took the avatar of one of the guys, named Shyam and the story is twined through him.

Shyam, being a lack of confidence boy, has just missed and got his girlfriend in a cinematic climax.
Vroom, passionate for cars (original man stuff) than girls, has a niche for journalism fulfilled his desire in the call center itself towards the end of the story.
Esha, who ache for the modelling career, ends up in quitting that aspiration and becomes a NGO (glamorous way of fund raising).
Radhika, married and succumbed to her better half's affair with another one, got out from the family entanglement.
Priyanka, Shyam's once lady love, a confused gal and got her due at the end.
Military Uncle, the senior in the gang, differs with his son & DIL, settled with them at last.
These happy endings of each one has come after that night's phone call from God. Really the story is packed and scripted well.

Shyam always thinks what the girls do for this thing or that thing and not at all thinking about his buddy Vroom's doings. Author brings out this boy thing in quite good way.

Real story-like one is suddenly turns into a fictitious one when God calls the youngsters in phone,what sets everyone's life upright. The author justifies it at the last. Justification is worth and credit goes to Chetan Bhagat. This is where he gets his best selling credits, I think.

The author in his first chapter commented through the character, about the English language command in this book as not highbrow and thus escaped. I had read some of the books written by Indian authors like Aravind Adiga, Shobha De,  Anita Desai...so different in language command. This book fails to catch up. The author may have a view that the call center guys are not well-spoken ones.

Then the effort in expressing the feelings is missing in this book. A novel must elaborate such things. Conversational dialogues which happen between the characters and the one line thoughts or comments  of the main character are put down in words. Not a single emotional feeling is pen down.

All the time Shyam, the main, had thoughts about other characters, their family, parents, GF and BF. Is he wont think about his own for a second after he left his house for work? Ya...he thinks...whom? his girlfriend Priyanka...More ridiculous...

The manager of the call center called Bakshi is shown as a fraudulent one who uses these boys' works as his own. They punish him and teach him a lesson....good...but how comes hitting him in his head with a book....Very Childish....

In the mid of nowhere in the night, one of the characters, Priyanka is love-making/sleeping/romancing with her BF, Shyam in the Qualis. Towards the end of the story, she opts to marry him not because of they slept together, her mother-chosen groom is bald and lied it to her....How Nice....

Altogether this one is a good pass-time story. But not vigorously, without keeping it down. I just put it down as other not-so-important things comes on my way. At one point the book not urged me to continue the reading. Cant believe this is the book which is acknowledged and acclaimed as a best selling novel from our country. Authoring a book is a tough one, I know, but make it irresistible and palatable to the readers is more tough, I think....